Updated for 2017. All new info will appear in *Red

We are all very aware of just how focused leftists are on producing high quality propaganda. (My previous post of the Teachers Unions Cartoons touches on this). And even though  they have their “low rent” thugs they also have their sophisticated agents from Academia. Bear with me, this list is long but informative. And will cross multiple programs, companies, and non-profits

Fate of the World (FTW)

Set to release on October 26 2010 “Fate of the World is a dramatic global strategy game based on the latest science. You, as head of the Global Environment Organisation (much akin to the World Trade Organisation) must complete a series of missions and make the necessary tactical decisions to call the shots for all mankind”

You can play different themed mission like “Oil Crash America” or “Dr. Apocalypse” where your mission is to raise the Earth’s temperature. The development company, properly named Red Redemption, (archive link *for 2017) is staffed with leftists from The Soros Foundation, The Ford Foundation, and The MacArthur Foundation. Their previously released title “Climate Change” can be played here

Gobion Rowlands is the director and co-founder of Red Redemption Ltd. prior to this venture Rowlands worked as a consultant to the Soros Foundation as well as other left leaning organizations. His grandfather use to tell him heroic Nordic saga’s “which fueled his early interests in mythology”. So naturally his love for mythology led him over to the Church of Climate Change. Along with helping leftists take over the world he also makes little model figurines (Awwwwww). *As of 2013 Rowlands still appears on the team list. Here

Diana Liverman Is an Advisory Board member at Red Redemption. She has an impressive CV and a good knack for pushing the Climate Change propaganda forward. She took a research fellowship awarded through the MacArthur Foundation and currently is on the Advisory Board  for the Ford Foundation at CUNY

Before heading off the Copenhagen she discusses about being more “optimistic” and very “pleased by Obama”. Then she makes a quick comment about an upcoming publication in Nature magazine in which she tells the world to start thinking about a world that is 4 degrees centigrade warmer, which she admits is “mind boggling” but it is needed to “add urgency to cut emissions even more [than current UN recommendation]” I find this incredible-its the first time I’ve heard a scientist say openly that they are making “mind-boggling” claims to help push policy.

Dr. Liverman also sits on the board of Cape Farewell. An organization that focuses on writers, educators,scientists, and youth collaborating to save the world. Complete with lesson plans.

*Dr. Liverman makes no mention of being on the Board of Red Redemption in her CV/Biography page on her site. Nor any mention of the foray into this industry: Here.

By 2011, Red Redemption’s Fate of the World was using the typical non-profit tactic of “donating” to other related charities. On their donation list for each game bought was a donation to TckTckTck.org, the face of the GCCA. That page can be found archived Here

And the background of GCCA (official site) can be found on Horowitz’s Discover the Networks Here. Their partner groups include other Soros related entities like 350.org, Apollo Alliance, Campus Progress, Change to Win, and all though not a Soros entity itself, the SEIU. TckTckTck.org began as a partnership between UN’s Kofi Annan and GCCA. So it is no coincidence that we see the the Senior Director for Programs and Strategy, Sara Cornish, coming to Games For Change from the UN (Global Pulse). And while Global Pulse seems noble (albeit strange at times) its direct goal is to harvest data. The program overview states goals:

We will leave Sara behind but continue onto Games For Change…

Now we swing over to Games for Change which is not only funded by large liberal charities but guess who makes an appearance here on the Board?  (scrubbed shortly after this post and no archive exists) That’s right-Fate of The World creator and Red Redemption’s Director Gobion Rowlands along with other members of the Ford Foundation

ITS ABOUT TO GET STRANGE

Games For Change Co-President Asi Burak previously came from Impact Games and had some success with “Play the News” and “Peacemaker“. However, one the funders at Games For Change is The Fry Foundation which gives money to Rashid Khalidi’s AAAN group-A known anti-Israel group (see below for funders)

Operation Cast Lead (Screen Shot with link) Was a short burst from “Play the News”. An innovative prediction and real life scenario game that revolves around the current news. However, one can’t help but notice that playing as either Israeli or Palestinian, in a currently polarizing real-world issue, is generally seen as lacking tact. Unleash its political propaganda. Then anything is acceptable. After all, its about getting into young minds first, by any means necessary. And in this case, it was successful. Sadly. 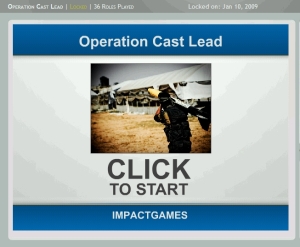 Games 4 Change Funders are: (along with some select grantees and donors)

The Fry Foundation: donated $ to Tides Foundation, Woods Fund of Chicago, and the AAAN (Rashid Khalidi’s group) that is allied with CAIR as well as the SEIU

Robert Wood Johnson Foundation: Which gets $$ from The Tides Foundation

We can keep going but I think you get the picture

*Games for Change also wants to encourage game reviewers. Or better yet, just train them. Think of it as a doubling down on Gamergate. It is the first item in their carousel Here

And then there is the GamerGate triple down. An entire initiative geared towwards avoiding a future gamergate. Its called GameImpact. And if you dont think its structured to impact the gaming community by constraining ideas then you just have to read their Orwellian platform. (Hint, #2) Here Notice their full report on the strategy of GameImpact has been removed? I’ll find it and enter a mirror here later.

Games For Change would like you to blog for them. In some more Orwellian speak:

Scary right? A community of gamers AND developers focused on “social good”. What fits into that box? Or more importantly, what doe not.

Also, Asi Burak is also listed as Chair in GameImpact and PETlab as a backer. You’ll read about PETLab in the next section.

Games For Change teamed up with Parsons New School to develop the dumbest game ever made. Of course it got a ringing endorsement from Timothy Geithner:

Its called Budget Ball and it’s sort of like rugby, I think, without any physical contact and randomly donning pool floaties.

So who is running the show over at PETLab? Check them out

And the Project Director, Karen Sideman, came from Games for Change-discussed above

In 2027 in an authoritarian security state, British Citizens must abide by government security measures and are placed under curfew at night. The player must navigate this complex political world and engage with the characters they meet along the way to decide who to trust in order to gain freedom. Here is the trailer for the game

In the list of foundations, publishers, developers, funders, sponsors, etc above you will find people still involved in 2017, in the video game and entertainment industry. If you find a game on Steam that seems to have an ideological bend its not a coincidence. I was hoping that Gamergate would’ve eventually found this. Instead the ones who should be exposed for their intricate propaganda were happy to keep it strictly about PC and bad journalism. They literally got out of it almost entirely unscathed.

*Games for Change 2.0. Academia + Games + Social Goals. Notice her lab has children and psychologists. Also notice they have geared kids to feel shameful for not guessing Sonia Sotomayor as “Hispanic Lawyer”. This is intentional. The answer was not Miguel Estrada. When she puts the flashcards on the screen for “Multiracial Superhero” the crowd answer isnt suffice. She says “I like Obama”. Which is weird since he was not a superhero but rather a president. Watch the whole video. This is the essence of propaganda. It is strictly social engineering. Brought to you by propagandists first, government second, private sector last. Also, watch her video under “concept” here

And also of interest

It goes beyond just video games. After all, there cant be any escape. You need to be socially engineered in everything you do. This is how it works folks.

Corrections made listed below (2010)

Correction: Originally I had posted that “Operation Cast Lead” was the predecessor to “Peace Maker”

Correction: Fox News “Duped” link removed due to confusion between the two games listed above

Correction: Games 4 Change Funders are now correct. Originally I had them link or referenced to Impact Games (Even though its a near mirror organization and now called GameImpact)