Special thanks to Rebel Pundit for extraordinary work on this story.

March 19, 2011 Chicago. Losers Serious Socialists rallied downtown for the anniversary of the invasion of Iraq. The main stream media was nowhere to be found, and for good reason. As the wave of social justice sweeps the world the details of the ideology are best left underneath the nearest rock. The media just crosses their fingers and hopes they don’t crawl out.

But crawl out they did. Advocating for Middle East style revolution, with guest speakers whose house was just raided by the FBI for allegedly having links to terrorism, really helped encapsulate the principles of the far left.

Organized by The Answer Coalition the rally was a true and clear look of just how the despicable spend their free time. The same tiresome rhetoric and baseless propaganda we all heard during the Wisconsin protests was echoed again. In tow were unfortunate looking men, ass-fisting lesbians, and a no-talent rapper named Philip Morris. Asked to perform on short notice Philip Morris placed an overnight order of “skillz” which apparently didnt arrive in time for the protest. But that didnt stop him from taking to the stage.

In one of his singles “The Same Ones and Zeroes” he claims he is “self-sufficient” and his bills are paid. But then thanks anyone who provided shelter because he just needs to “break even at decent altitude” (aka economic justice). Mobb Deep’s Prodigy has sickle cell and looks healthier than Philip Morris. I dont know why, he said he had “no apparent health conditions”. Give this man an Obama Care waiver! (cue to 1:38)

Well we should’ve known that everything the Bamster touches dies. This was evident when he visited Mexico, and shook hands with the director of the National Museum of Anthropology, who died a week later.

Now under Health Care reform the expansion of government exchanges (Medicaid) we learn, from a University of Virginia study, that surgery patients with Medicaid die at a greater rate than those with no health insurance. What’s more is that the uninsured have a shorter hospital stay which in turn makes the overall costs lower.

Originally the quagmire of expanding this failing system was first pondered in the Wall Street Journal 12 days before Obama was inaugurated. The fact that Medicaid was inefficient, fraudulent, and overly complicated was not news to anyone. It is, after all, the original “Death Panel”.

Medicaid: “You can’t handle the Tooth!” 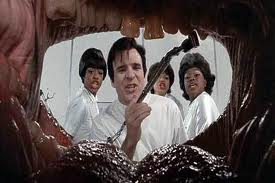 Dying from an infected tooth was common over 100,000 years ago. Since the advent of modern medicine that cause of death is so rare that even mentioning it as a possibility today sounds like preposterous fiction. Except for 12 year-old Deamonte Driver. The family had grown accustomed to relying on the Medicaid system so when they lost it his brother’s six rotten teeth became the priority.

An $80 procedure could’ve saved his life. But the infection as a result of the abscess had already reached his brain. Deamonte Driver’s predicament is far from being unique. The article goes on to outline the dismal results of children’s dental care on Medicaid:

Some poor children have no dental coverage at all. Others travel three hours to find a dentist willing to take Medicaid patients and accept the incumbent paperwork.

In spite of efforts to change the system, fewer than one in three children in Maryland’s Medicaid program received any dental service at all in 2005…

The figures were worse elsewhere in the region. In the District, 29.3 percent got treatment, and in Virginia, 24.3 percent were treated, although all three jurisdictions say they have done a better job reaching children in recent years.

The most disgusting part of this conundrum is that Deamonte was eventually treated for a headache (given a pain pill) in school and the next day was much worse. Its particularily grotesque because we see the same type of non-caring, uneducated intervention endorsed by the President himself in the video below. Notice that the answer to the question has nothing to do with personal responsibility and/or choice. It has to do with “certain rules”. The Driver family found it near impossible to navigate the “rules” and Mrs. Sturm’s mother should be another victim to those rules according to the President’s plan. Just take a pill and we’ll square up with each other in the after life

In conjunction to the pill he (Obama) discusses “End of Life” care. Well, Medicaid helped determine Deamonte Driver’s “end of life” care. I hope poor Deamonte made the best of his 12 years

In a world becoming increasingly familiar with drone aircrafts, high resolution video phones, and the ability to look directly into neighborhoods via Google Earth, three states have expanded the definition of eavesdropping laws to prosecute amateur videographers who may record police interactions. If you happen to record an interaction with the police in Maryland, California, or Illinois watch your ass-you may be heading to the “Clink” where you can convert to Islam, learn how to make a tattoo gun out of a pen and a Walkman motor, and get drunk off pruno.

Thankfully Washington state does not have these laws. Yesterday a confrontation between to young girls and the police escalated to the young girl catching a knuckle sandwich from the police officer. What was the original charge being investigated you ask? Jay Walking! A bystander caught it on video

It should be noted as well that the three states that have taken these bold steps to prosecute private citizens photographing in public are traditionally liberal states. However, this is for the greater good. After all, how can we maintain order and civility if there is another side to the story readily available to the public via the Intertubes? If we could just outlaw public photography of public officials and public employees then Bob Etheridge (D-NC) wouldnt have had to apologize for this yesterday