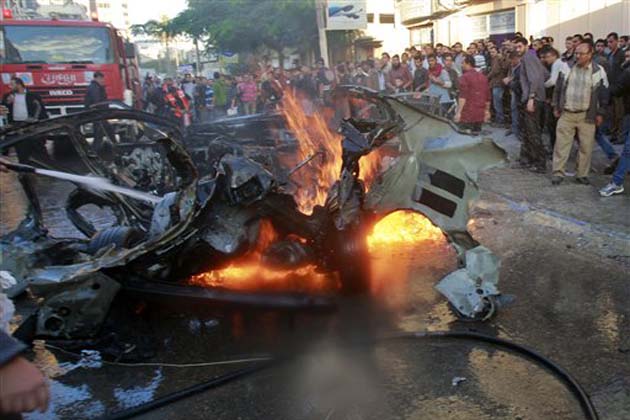 Raped by missiles–> Ahmed Jabari’s car. That will buff out; little bit of Armor All, some Tire Wet, and it will look showroom new (Photo Credit: Debka)

The top loser of Hamas was missile raped out of existence recently, (hooray) and has hastily been replaced. It seems that Marwan Issa is ready to expedite his martyrdom. From the blurb;

DEBKAfile: Issa, who is in charge of Hamas’s special operations units, headed  the radical organization’s military delegation which travelled to Tehran and Beirut in mid-September and signed secret mutual defense pacts with Iran and Hizballah.

If you havent added Debka to your list of sources and places to check in daily you should do so. You wont be disappointed. For example, were you aware that the Israeli Ambassador packed up and fled Cairo? I wasnt. Or that “Iran’s global cyber war-room is secretly hosted by Hizballah in Beirut”? Me neither.

Petraeus Update: Yesterday morning around 5:47 I received an email of a VIP Army ball list from 2011. It was labeled as “Sensitive-For Official Use Only” (FOUO/S) because it had the home address and phone numbers of high-ranking personnel from multiple branches of the armed services as well as intelligence agencies. Anyway, the file also confirmed that General Allen and Jill Kelley had attended the ball. Kelley’s home address was on there and a separate file contained the Google street view pics of her $1.4 million home. You can find info on the file and the home pics on my post on (CRO) Conservative Report Online here 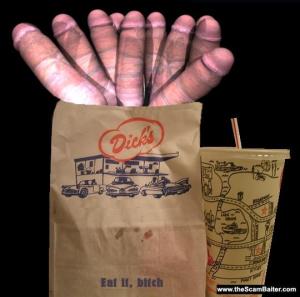 On Thursday May 19 we published a newly released videos: One showed the torture electric generators found when protesters raided an underground prison; the second video was of Hosni Mubarak’s security forces opening fire (an possibly killing) a protest that was already in custody.

Today (Tuesday May 24) Thomson Reuters is reporting that Hosni Mubarak is set to stand trial for the murder of protesters and could face the death penalty. The latest video showing the alleged killing of an unarmed, and incarcerated man recently emerged (CAUTION GRAPHIC)

A new video from the Egyptian revolution shows Mubarak security forces firing live ammunition at prisoners. It appears that one is killed. We all saw the regime using live rounds against the protesters in Tahrir Square in an attempt to put an end to the protests. But that practice of firing at dissidents also happened while those in the opposition were in custody; after the regime had control of these individuals. (live fire starts at 0:30)

Piggipedia is an online project that seeks to expose the crimes and abuses of Mubarak’s corrupt security forces. Activist Hossam al-Hamalawy has taken on this task. Flickr has deleted the photos he uploaded to help activists, and the entire world, see who in the regime needed to be investigated and/or prosecuted. A small obstacle for Hamalawy that was easily overcome.

When activists stormed the State Security offices in Nasr City they had video cameras on hand to show the underground prison cells. Former detainees were also on hand to describe (video) their experiences of torture at the hands of regime officials. Also, in the underground prison activists found a stash of the electrical generators used to torture Mubarak’s political opponents. Remember Lethal Weapon?

Look for al-Hamalawy and his Piggipedia project to help further expose the brutality used against the political opponents of Mubarak.

This is what Democracy looks like. Gunfire rings out it Cairo’s Tahrir Square as protesters joined with Army officers take to the streets. Twitter user ahmedmorsy07 has been documenting the action along with Youtube user Kikhote

Both have been instrumental in documenting the chaos in real time. Here is video from Tahrir Square this morning with machine gun fire (caution-some images may be disturbing) 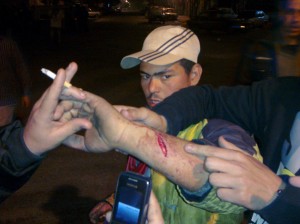 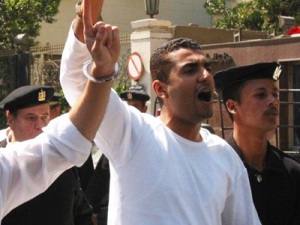 My Condensed Article on same topic can be found on Yahoo here.

This is a little tough to follow so I am going to keep it as simple and as clean as possible. On January 28, 2011 Wikileaks released a cable that showed US Government awareness and involvement in Egyptian affairs. Now we are going to look at the “behind the scenes” players; their motives, their actions, etc. By the end of this post you will know who is involved and what the State department knew-Before hand! Are you ready?

The Wikileak Cable and Alliance of Youth Movements

I’m not going to go over this. Read the document for yourself before proceeding. The cable (created on 12-30-08) refers to an April 6 activist that was detained returning to Cairo from the Alliance of Youth Movement in NYC. Well, who else was there that may have had an interest in Egypt? According to their program (pg. 2) the list of attendees includes Maajid Nawaz of The Quilliam Foundation. Oh and the Obama Media Team was there as well-no big deal. (The conference took place on Dec. 3-5 ’08…stick with me here)

Maajid Nawaz, a former radical who was imprisoned in Egypt for 5 years, later denounced his radical associations, and focused on being a good democrat. He was such a good democrat that before the Alliance of Youth Movements meeting Undersecretary James K. Glassman mentions Nawaz’s organization by name. Not only that, the interviewer shares his concern with possibly unleashing something that may come back to bite them. And also that the State Department is funding Howcast to host this at $50K

GLASSMAN: Actually, one good example of one of these groups is the Qulliam Foundation
Later
…these governments may not appreciate your involvement in inspiring or in helping to create this network of people that are – that they could – would see, and in the case of Egypt, they do see as a threat.  Don’t you run the risk of unleashing something here that is going to come back to bite you, especially with our allies?
GLASSMAN: We are very supportive of pro-democracy groups around the world.  And sometimes, that puts us at odds with certain governments.
Yeah, but that’s –
UNDER SECRETARY GLASSMAN:  Now, we have to work with those governments.  And let me also just say, there’s a difference on an operational level between public – what we do in public diplomacy and what is often done in official diplomacy.  We are communicating and engaging at the level of the public, not at the level of officials.  So you know, it certainly is possible that some of these governments will not be all that happy that – at what we’re doing, but that’s what we do in public diplomacy. UNDER SECRETARY GLASSMAN:  And I think this is an important part.  We as a government have been engaging with such civil society organizations in places like Egypt for a long time.

“On December 2, the government prevented an Internet activist from traveling to the United States to participate in the December 3-5 “Alliance of Youth Movements Summit.”

Nawaz has friends from the same group of April 6 activists, like the one mentioned in the Wikileaks cables. He made sure to go on TV yesterday and today to make sure that everyone knew that he was “good friends” with one of Egypt’s April 6 founder Ahmed Salah (See Videos below). Nawaz says that Egypt is “personal” as we can see in yesterdays post in the UK’s The Times. (Click image for full post) 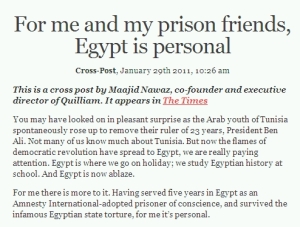 Credit Where Credit is Due/TV and Tweets

Maajid Nawaz is asking for credit to be given to, well, hard working folks like himself. He has appeared on TV twice and tweeted enough to let everyone know that this is the work of democracy in action-not the Muslim Brotherhood. After all, he did meet with the Obama Media Team at the Alliance of Youth Movements Conference and they are the best community organizers on the planet. Below are his tweets and recent TV appearances. Revenge is a dish best served on…Twitter? Click image and Look at bottom post addressed to Hosni Mubarak 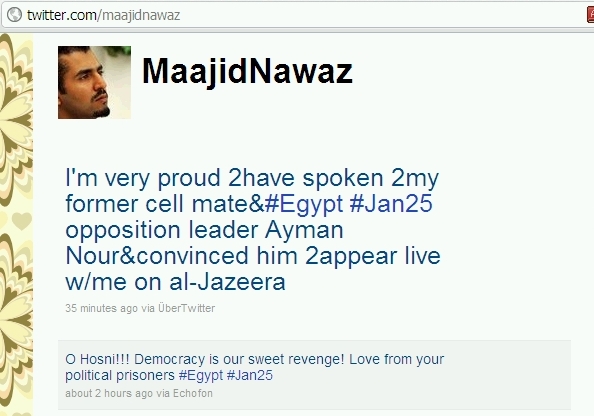 So its personal-he doesnt want the Muslim Brotherhood to get credit for something they worked so hard for. Notice in the videos below they need to move “NOW” for democracy before it lost. Doesnt it sound like  the rhetoric with the Stimulus or the Healthcare legislation? (Do it Now!) Also, it appears that Nawaz only has one outfit.

If you missed Nawaz’s admission of being good friends with one of Egypts April 6 founders (same group as the dissident detained according to Wikileaks cable) you can just check his Tweets!

IMPORTANT: Ahmed Salah IS NOT the individual whose name was redacted from the Wikileaks Cable. I have that individuals name and depending on the amount of cooperation I get from those involved will depend on whether or not I release it.

Training the Egyptian Dissidents-and the Catalyst

At the Alliance of Youth Movements the participants were trained for this protest and reflections on Egypt were discussed immediately afterwards. Here is a screen shot of their agenda-“How to be a Dissident”- immediately followed by the discussion on Egypt. Undersecretary Glassman’s interviewer had uncanny intuition. 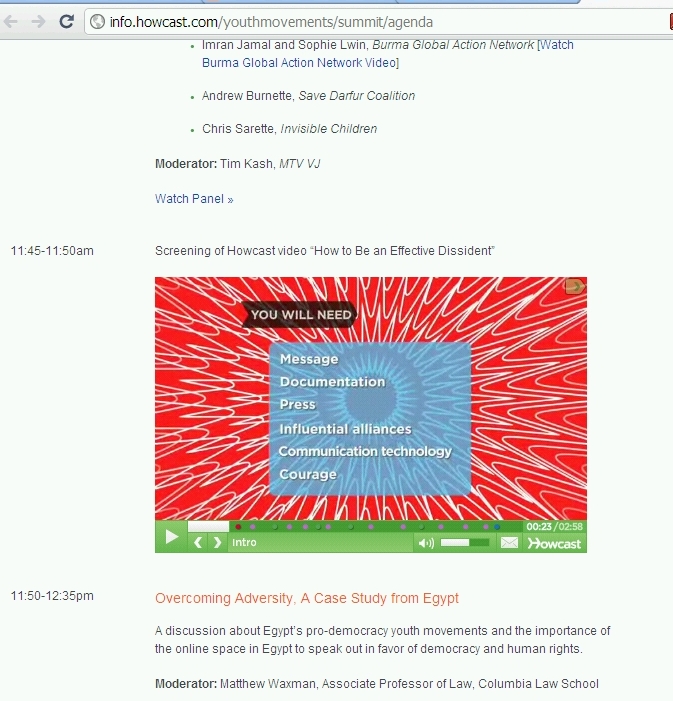 In the Wikileaks cable it is stated that the detained April 6 activist at Cairo Airport had certain documents. Among them was his schedule to meet with US Government officials on Capitol Hill. So who can get this type of meeting? Maajid Nawaz can. After all-he testified before Congress in the past. Click for Senate Testimony 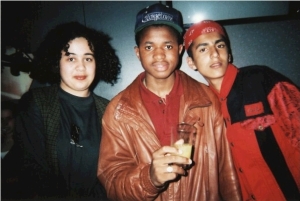 Maajid back in the day(right) kicking it old school

Why was the Cable ever written?

Simple-its “Cover Your Ass” tactics. The Cable was written on 12-30-08. According to a report from the State Dept:

On December 30 and 31, police prevented protesters from demonstrating in downtown Cairo against Israeli attacks in Gaza.
Some were detained and they were released but just in case their dissident happened to get taken out or arrested, those in the know would have a nice heads up. They could just wipe his name off the dry-erase board and look for another believer to help them agitate. The cable got sent because they had feared their dissident might get into trouble with authorities or worse. Basically they used them-and were prepared to toss them in the trash if the goal was unachievable.
Loading Comments...