New photos of the man believed to be Stephen Paddock at the Reno, NV August 23 Anti Trump Rally have emerged.

Shortly after the Las Vegas Massacre that left 58 people dead the internet went crazy looking for Stephen Paddock. His digital fingerprint was nearly non-existent so the effort turned to looking into real-world events. Within hours Pamella Geller had posted a picture of a man at the August 23 Anti Trump Rally in Reno Nevada that resembled Stephen Paddock. Very few photos, and only a single quick video existed, of the man in question at that time. Here is the tweet linking to the post:

Below are photos of the Reno event from  from August 23. The man in question was then only man wearing the pink NASA shirt and the pink hat. The first, in the street, is the reverse angle of the short video initially released. The other two show him at the event just behind the barricade. He came with the woman on the the right (his left) and both have similar signs (small font, long message, same dimensions). The man believed to be the Las Vegas shooter does not appear to be Stephen Paddock. His height and weight do not match. His neck is much thicker than that of Paddock. Furthermore, nose shape and size – along with the size and height of his cheekbones are also a dead miss. He appears younger than the 64 year old Paddock and attended the rally with a woman who is not Marilou Danely. Given Paddock’s anti-social behavior it would be extremely out of character for him to travel with another woman to a social gathering.

The last photo is the most convincing because we have this man smiling. It is here that we see that the shape of this man’s face and Paddock are not a match. Height, as seen below puts this gentleman in the range of 5’10” as the barriers he is standing in front of are 43″.

And now the man in question…

Notice, this mans goatee is entirely white. Paddocks is interspersed with blond hair. The most telling is the corners of the goatee where Paddock’s is not gray, even in post-mortem. Next, Paddock has extremely light and thin eyebrows. The man in question here has dark eyebrows that are much thicker. The man at the Anti Trump Rally in Reno on August 23 is not the Las Vegas Shooter Stephen Paddock. 100%. And I am withholding this man’s name until I have permission to use it for this purpose.

Additional media is available on this person. The problem was that this man was positioned perfectly to view the protest. That means the cameras were near him and pointing away. He was literally standing next to the cameras the entire time. The only other video that exists (to my knowledge) is a brief 1 second panning of the camera shortly before a member of the Working Families Party took the microphone. Additional still pictures exist and those will be forthcoming. Links to the highest resolution galleries of these protest are posted at the end of this entry. Credit: Camara la con Banda

Originally, folks scouring the internet had thought it was possibly Scott Richardson – if not Paddock – who is active in Reno and appears at most of these events. It is not. While Richardson is closer in age to Paddock and the man in question, the man in the pink shirt is not Scott Richardson. Below is a high resolution of Richardson at a Reno event a short time after the Anti Trump Rally of Aug 23: 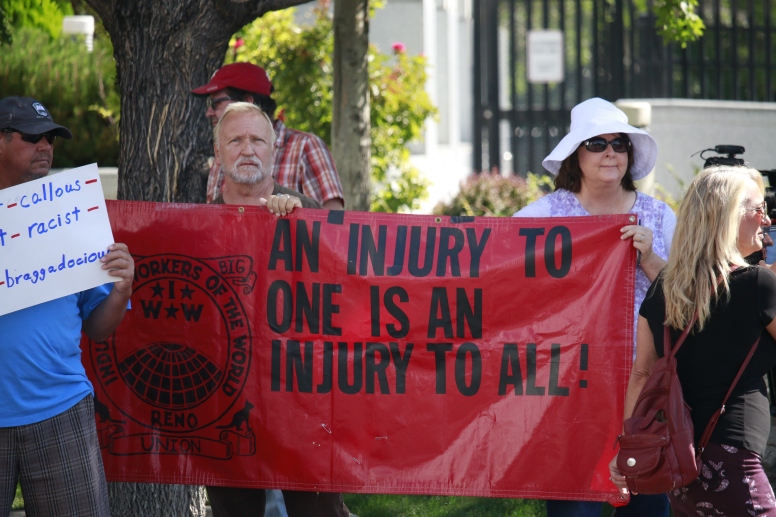