My Twitter followers undoubtedly have seen me tweeting posts from a new blog called “The Crying Wolfe” and some may wonder exactly what it is. It is quite simply a thesis in how to structure a proper rebuttal to internet trolls whom have targeted an individual for total personal destruction.

The remnants left behind in the Weinergate scandal was an amalgamation of deranged individuals that harness the power of this free digital medium and use it as a tool to smear people. If you investigated the scandal and the players behind it you were targeted. And just like the cowards the perpetrators really are they hid behind fake online personas, sometimes created in the hundreds, and spent the majority of their waking hours harassing those investigating the scenario.

Some of those targeted were old enemies, some were new. Inevitably the driving force behind the relentless attack came down to a clash in ideology; which is usually what always lies at the base of these types of feuds. However, rather than go head to head, liberal cowards (oxymoron) chose instead to operate from the shadows and in more than one occasion crossed the line and participated in real life illegal activity. This was done strictly for intimidation. I am glad to say that it did not work.

Over the past few months every aspect of this scenario was picked apart, analyzed, processed, and documented. While I have an idea of who the author, or authors, may be at The Crying Wolfe, I can’t be certain. However, the topics cross into and share some of the same details that I myself worked on while investigating this prolonged harassment. Some of those researching this followed the social interactions and activities closely while others focused strictly on the technical aspects. The online social activities (mostly on Twitter) was a little too much for me to follow. So I did what I do best and I approached the problem from the technical angle. In the next few days I’ll start to reveal what I have learned.

I encourage everyone regardless of your political ideology to read up and follow this as it develops. If you are a leftist I guarantee you would not encourage this behavior that leftist hacks have partaken in.

Since there were so many fake identities that were created just to harass people we are going to start here with a quick tutorial on how a sharp eye, and persistent research, can reveal the true identity of someone who thinks they are “anonymiss”.That will be the first post…

Oh, and then we are going to address this: 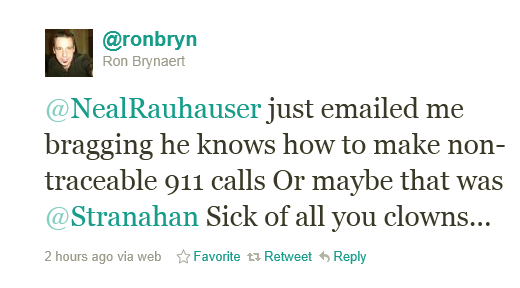 Dont worry, I know too.

Is it all bullshit? Was this another piece of misinformation used to throw off the scent of those investigating this? Also as a new reader you may be asking what untraceable 911 calls have to do with Weinergate and those investigating it. Just wait, it will blow your mind.

PS-To the perpetrators, I’ll give you 24 hours do come clean and fess up. Otherwise I will do it for you. Deleting your posts and pseudo lawsuit documents will do nothing. They have already been filed away and then there is also a little thing called “Freezepage“. In addition all of your conversations (fake accounts included) have all been screen-capped. I would also love for you to take legal action so I can use your information through discovery to confirm my findings. Happy New Year!